Happy Halloween to all my friends & colleagues! Those of you planning to head to Lahaina for the festivities tonight, please remember to drive carefully, designate a sober driver. People will be drinking and traffic to and from the West Side is bound to be chaotic. The Maui Police Department promises roadblocks and sobriety tests at designated points along the way so be smart, have fun and please do not drive while or after drinking.
I'm off to Pennsylvania this weekend and will be back in the studio next friday.
Posted by Tony Novak-Clifford at 6:54 PM 1 comment:

OK... I've been trying to delete my image files from my DRR archives with little or no success. Out of frustration, I called my credit card company to contest the auto-billing for an advance one-year membership renewal which was auto-billed by DRR to my card in august. The credit card company was able to issue an immediate and full credit for the membership fee. I suggest my fellow DRR members left holding the bag attempt to do the same and call your credit companies, especially if you have been auto-billed for membership renewal or new membership within the last six months.
Posted by Tony Novak-Clifford at 2:55 PM No comments:

I know there are several photographers here in Hawaii, myself included, that were members of Digital Railroad, a three-year old company featuring online storage capacity for photographers producing images... and an online stock agency, marketing photographer's images online by allowing art-buyers to perform highly targeted image searches, purchase use licenses and download those licensed images all from the convenience of their computer. While, in no way is this an original idea, DRR did take a smaller cut of those licensing fees than most traditional sources of stock photography. Membership to their service was a bit pricey ($550/year for a prepaid service subscription billed a year in advance) but advantages seemed many, 100gb  of online storage capacity on their servers, access to and the ability to add images from your archives to the DRR "Marketplace" stock library which was accessible to all potential stock photography and art-buyers... DRR even sent out a daily "want list" to member photographers, the list assembled from image requests from book & magazine publishers.
It was about a month ago when rumblings began being heard that all was not well with DRR. On Tuesday, the company sent out a notice to members that it was shutting down and members had 24 hours to download their image archives (and it appears that may photographers were storing their ONLY copies of their work at DRR). The bad news is that the company was only now operating a single server to handle those huge image file downloads, leading to shut downs, error codes and long-slow .ftp queues as members hoped and prayed that the system would stay up long enough to retrieve their content.
The Stock Artists Alliance (SAA) has apparently negotiated a deal on behalf of DRR members to keep the server up and running until 11:59pm tomorrow (Friday) night, giving members a little more time to retrieve their files. Not the best possible solution, but certainly a better alternative outcome for those with original content and no other form of back-up hosted at DRR. Kudos to Betsy Reid, Executive Director at SAA, and her staff for stepping in on behalf of all DRR members.
As a member, I find the actions of DRR reprehensible. I was just auto-billed for another year of membership in August. Fortunately, all of my images hosted at DRR are also backed up on on hard drives in a mirror RAID configuration. Still, I began calling DRR on monday to try and find out exactly what was going on. Already on monday, almost all of DRR's phone lines had been shut down. Email queries to DRR were returned as undeliverable. As I said, all of this had taken place by monday... at least a full-day prior to the company telling members it was shutting down. I could go on and on about how poorly treated I feel we members have been from the company that had no problem with taking our membership fees without advising us of the real problems within the company. In lieu of my rant, I direct you to one penned by photographer Vincent LaForet who states the case both eloquently and powerfully here.
So... those of you with images stored at DRR... get to it, if the servers stay up, you have until midnite tomorrow. As soon as I post this entry, I'm going to attempt to delete my DRR archives hoping to avoid them turning up somewhere if and when another party gets hold of the DRR hardware in the future.
Posted by Tony Novak-Clifford at 12:30 PM No comments:

Early yesterday morning I found myself flying to Honolulu to capture portraits for the December '08 issue of Modern Luxury Hawaii Magazine. After settling into seat on the plane, as usual, I reached into the pocket in front of me and pulled out the current issue Hawaiian Airlines in-flight magazine Hana Hou. I was surprised to find the image below running full page in the magazine's "Native Intelligence" section. I had almost forgotten all about this assignment to photograph Japan's master traditional kite maker, "Nobu" Yoshizumi. Yoshizumi-san was visiting the island for several days as he conducted workshops in kite-making & decorative painting in the traditional way.
Meeting him late one afternoon, Yoshizumi-san was a diminutive, gentle, kindly and most accommodating gentleman who agreed to every one of my requests, no matter how strange they may have sounded. The image below, for example, involved careful rigging of one of his delicate creations from a fully extended C-stand while I balanced high above him on a ladder in an attempt to simulate the appearance that he was actually flying the kite. I know he thought I was crazy at first, not really understanding what I was trying to explain I wanted him to do... he acquiesced nonetheless. Afterwards, I quickly showed him a few of the image previews on the tiny LCD monitor on the back of my camera and his eyes lit up in delight. 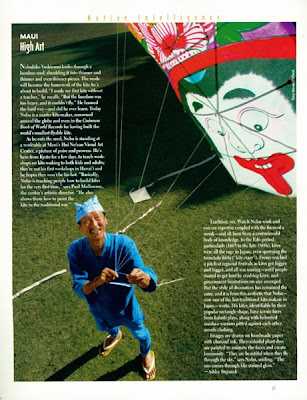 It's that time of year again, at least in the publishing world, when thoughts turn to the winter holiday season. Maui No Ka Oi magazine just put out the new Nov.-Dec. 2008 issue and inside is a holiday home feature I shot the day after New Year's last year. The home belongs to a close friend and member of the Art Hash Harriers Travelling Critique Clique. For publication purposes, she requested anonymity, a courtesy I will extend to this entry. Here's the tear sheets from the spread... 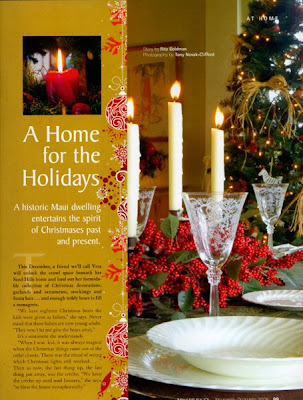 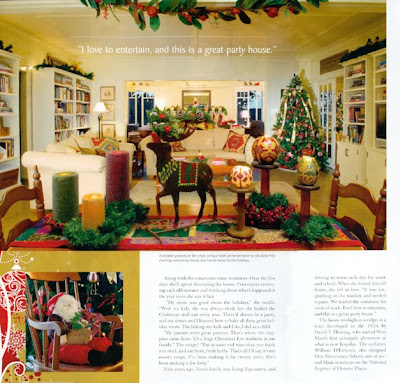 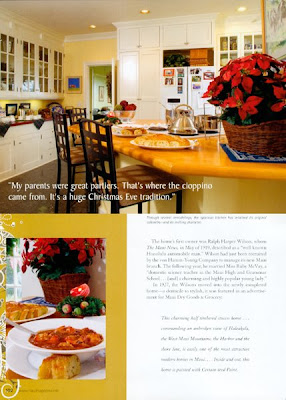 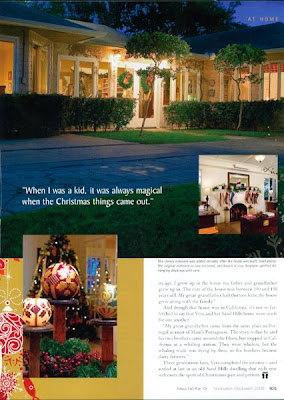 Posted by Tony Novak-Clifford at 5:40 PM No comments:

To illustrate an editorial piece on the "fear factor" when purchasing gallery art for an upcoming issue of Art & Culture magazine, the image below was created by compositing two separate image files to compensate for the inability to optically (even at wide open apertures) throw the art & wall out of focus sufficiently in a single image. The designer plans on running this composite as a double page spread with graphic text running over the left side of the image. 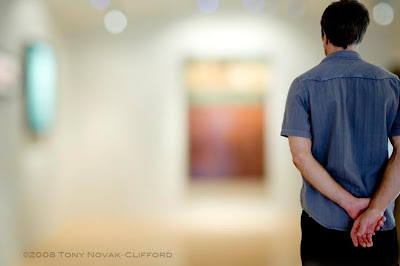 What Have We Become?

"In my own country I am in a far off land.
I am strong but have no power.
I win all but remain a loser.
At break of day I say goodnight.
When I lie down I have a great fear of falling."  Francois Villon
Posted by Tony Novak-Clifford at 4:40 PM 1 comment:

What Were They Thinking? 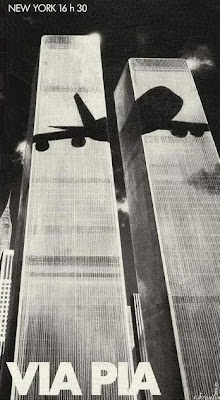 I found the above advertisement for Pakistan International Airways on Rachel Hulin's blog this morning under the heading "Ads Gone Bad". I'm guessing this ad ran prior to September 2001. Just the same... tres creepy.
Posted by Tony Novak-Clifford at 4:14 PM No comments: 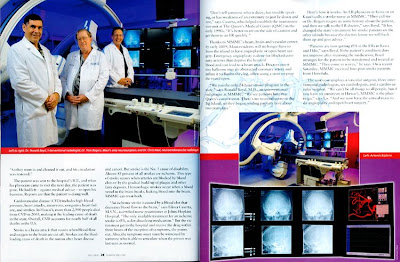 The latest issue of HMSA's Island Scene Magazine arrived in today's mailbag. Here's the double page spread I shot of the Artemis Biplane device, a cutting edge technology allowing neurosurgeons the tools to rapidly and relatively non-invasively operate on the tiny blood vessels of the brain in an effort to treat stroke victims.
As always, the package of magazine copies also contained a warm and encouraging letter from Art Director Jonathan Tanji.
Posted by Tony Novak-Clifford at 2:32 PM 1 comment:

I was dropping off a friend at his home on Pulehuiki Rd. in Kula last thursday when I noticed this stand of amazingly symmetrical cypress trees lining another driveway. Standing almost 30 ft. high, the conical shape of these things reaching into the sky only accented the surreal nature of their orderly planting.  I squeezed off several photographs and varying angles. Of the resulting image files, I like this one the best. Some very basic color adjustments in my Camera Raw processor further accentuated the fairy-tale nature of the scene. 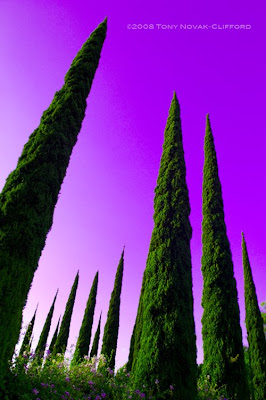 Posted by Tony Novak-Clifford at 2:07 PM No comments:

As promised, on October 3rd, James Nachtwey unveiled his TED Award wish to change the world, displayed projections of his images of victims suffering from XDRTB, an extremely drug-resistant strain of Tuberculosis, on selected public building around the world, on the TED website and linked from a multitude of different blogs from around the world. You can find out more by clicking here.
Erika Scott is a former Maui girl who left the island several years ago to seek her fame & fortunes in Los Angeles & New York as an acclaimed wardrobe stylist. Erika's recently returned home, though  she still travels back & forth to the mainland to work on projects. Below, you can see samples of Erika's work. She is available as a wardrobe stylist in Hawaii also. Contact her at: erikascott@mac.com 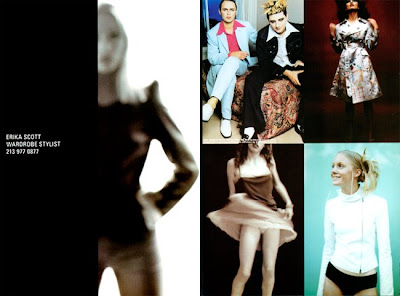 I return to a regular time slot on the the radio & internet airwaves tomorrow morning at Manao Radio. The Academy of Errors program will feature, as always, an eclectic mix of sounds spanning the genres of folk, pop, early progressive, jazz, experimental & ambient soundscapes each & every tuesday morning from 6 am to 10 am Central Pacific Time. You can listen via live streaming over the internet by going here.
Posted by Tony Novak-Clifford at 6:24 PM No comments: