Hotel Advertising Takes A Turn For The Sexy


My usual morning routine... wake, crank up the caffeine machine, pour a couple of cups down my throat while perusing the news websites & favorite photography blogs. For the past few weeks, the photo-blogosphere has offered little that really caught my eye... that is, until this morning.

One of my usual stops is always to The Photography Post, an aggregate site compiling what the editors there believe to be some of the best blogging from the commercial, editorial & fine-art focused photo blogs. One of the blogs regularly promoted there is that of the NY based Photographer Representation Agency Stockland Martel.

Titled "Group Hug", you can see the film below:

Those of you working in the commercial end of things here in the State of Hawaii, or other destination resort areas around the world, no doubt find yourself in the employ of an hotel/resort company from time to time. No doubt your experience, in almost all cases, is to keep things SAFE... tried & true, mass appeal, noncontroversial... SAFE, when producing advertising and marketing imagery when working on their behalf. Rarely... very rarely is there any chance of producing anything even mildly out of the box, artful, risque or memorable. Any exception to that rule is just that... an exception.

The video above brought to mind a couple of very notable exceptions to the rule that also pushed the limits and took a decidedly left-turn from the safe route. All but one of them were quickly retired, no doubt from a sudden pang of fear that someone might take offense. However, these campaigns were memorable, at least to me... evidenced by the fact that they immediately came to mind when watching the Rolston video above.

Here in Hawaii, the boutique resort company AQUA Resorts enlisted a team of west-coast photographers to produce a series of lifestyle marketing images for their Hotel Wailea property on Maui a couple of years ago.

One of the images, a playful B&W image of another MFF trio in the midst of a bed-top pillow fight while clad only in their undergarments was one of the lead images of the slide show that ran on the property's website homepage for a short while. The "pillow fight" image has long been removed while other, "tamer" images from the shoot remain.

At least they had the balls to try something different, sexy and a little out of the normal box!

"Who Are You Sleeping With Tonight?"

The TV ads were considerably tamer than the Rolston/SLS Hotels video, but still hinted at the idea that a notable part of their business fell in the "tryst" category and that hedonistic activities might be in full-swing just beyond that Do Not Disturb sign hanging from the doorknob.

"What Happens In Vegas Stays in Vegas...."

Another nod to the pleasure-seeking crowd and another example of the rare straying from the conventional & safe when it comes to resort destination marketing.

Kudos to senior marketing management & their advertising agencies and the creatives they enlisted and, hopefully, will continue to occasionally enlist in producing memorable campaigns. Even in the very short life spans, these campaigns left an impression, were memorable and allowed certain creatives to flex story-telling muscles that were different, potentially controversial & exciting... a grand departure from the normal sterile depictions of hotel rooms & amenities.

Posted by Tony Novak-Clifford at 2:34 PM No comments: 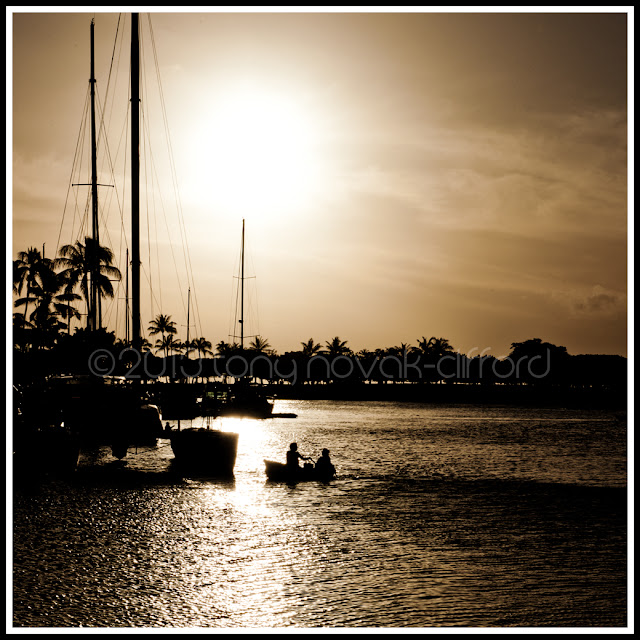 This weather is depressing. For the past week and then some, it's been cold, wet & windy. Sideways rain lashes the studio windows. The cold & damp has required the warmth of the small, irish wood stove most evenings. Chester has been unable to romp with his friends during the customary morning park excursions and is beginning to climb the walls, much like myself.

Did manage to sneak in a second trip the the eastern reaches of the island between deluges on friday, all in pursuit of editorial completion to a story destined for the pages of Islands Magazine.  The story features food and the subject of my lens made sure that not only was I nourished on-set, but also loaded my front seat with a stack of styrofoam containers filled with grilled island delicacies for the winding return trip home. Edit completed and uploaded to the PE by that evening.

There has been plenty of studio work to keep us busy indoors... cataloging works by a watercolorist friend, ads for a local glass-blowing studio, a head-shot or two...

Then there is the end-of-year tax prep... well underway and almost ready to drop off at the accountant's to see what sort of magic she might work on my behalf again this year.

While I am grateful for the indoor work to occupy the hours and keep the boredom at bay, I am really over this weather - forecast to continue unabated at least until this weekend. My lawn is now overgrown and there are numerous other outdoor projects requiring immediate attention. They will have to wait until the winds & rains abate.

Tonite, the newly formed Manao Radio Task Force converges for it's second formal meeting and planning session. Thursday is a pre-pro meeting with fashion designer Maggie Coloumbe, model fittings to put together the plan of action for the soon-to-happen shoot. End of the month we return to Hana for a mix of rest and work... then, if all goes as planned, an escape to the equator once again with plans for Bali & Cambodia in the works.

If the warm sun doesn't show up here soon, I'll just have to go to it...

Posted by Tony Novak-Clifford at 2:56 PM No comments:

Another Call For Entries 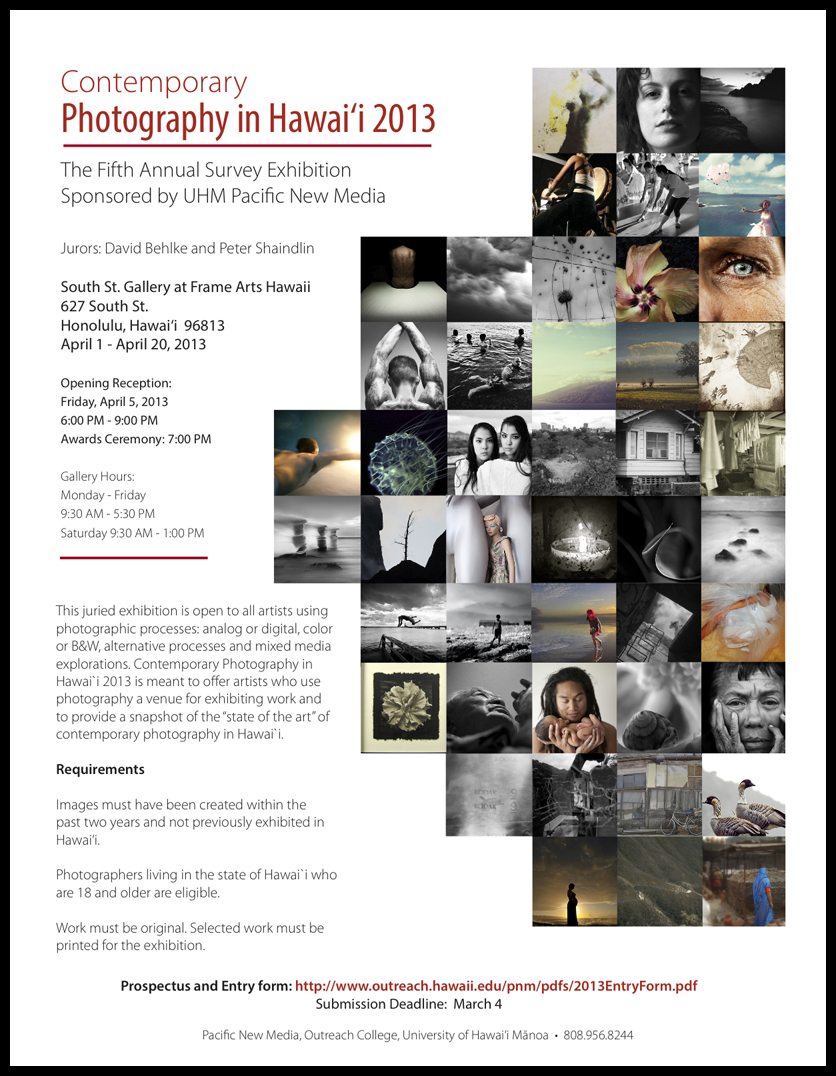 Posted by Tony Novak-Clifford at 12:22 AM No comments:


Finally got my hands on a copy or two of the most recent issue of Fairmont Magazine, along with a nice note from the publication's designer. The publication, put out quarterly by a team in Montreal, Quebec, is the corporate magazine of Fairmont Hotels & Resorts Internationally.

Contacted by them late last spring to photograph recent renovations to their Maui property, I am ecstatic to see the results finally in print, a ten page Design Special spread with multiple full-page photo use. 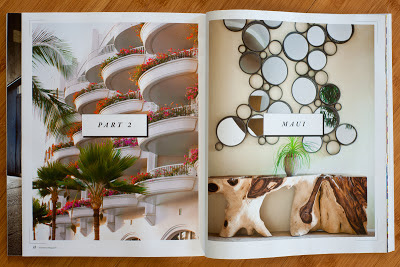 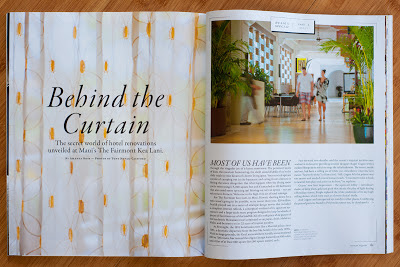 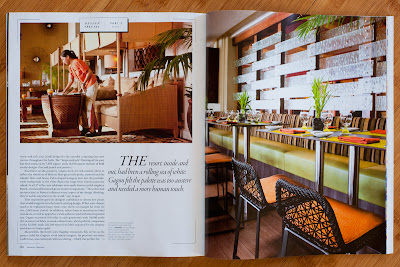 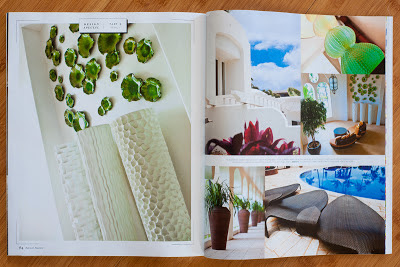 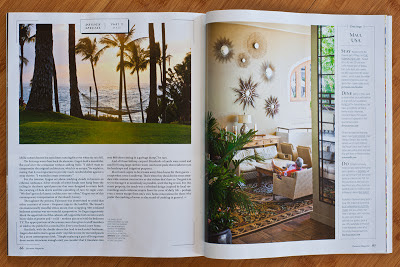 Equally nice was the note received from the designer:


"Thanks for everything. You have no idea how much i love them. I was scared that this story will visually look like a boring hotel article, but this is stunning. Thanks so much."


Always eager to lend a hand to a worthy non-profit group or community organization, I was contacted recently by the Hawaii Chapter of The Make-A-Wish Foundation .  The plan was to capture photographs of young Kenny, a child diagnosed with Sarcoma, and to illustrate his desire to see snow for the first time. The foundation just sent me the latest issue of Honolulu Magazine, sporting a full page, inside back cover ad featuring my photo of Kenny. 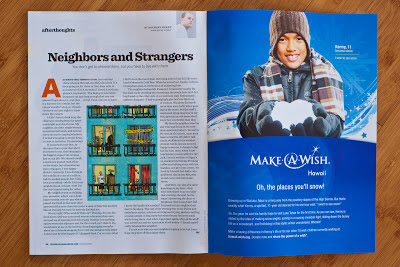 Posted by Tony Novak-Clifford at 3:33 PM No comments: 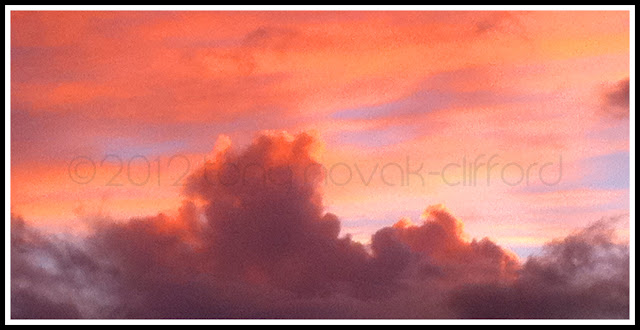 One day, a month or so ago, I was having a chin-wag session with old friend, publicist & client Bonnie Friedman. As it often will... our conversation turned to the subject of art.

A frequent traveler to the Big Apple and European Continent, Bonnie had seen and seized upon the idea of the "Pop-Up Gallery" as a way to maintain intellectual & creative stimulation on this isolated rock filled with individuals of ingenuity & creative passion.

A mutual recognition that venues for artists to show and sell their work outside of mainstream commercial galleries and hotel lobbies were virtually non-existent here, and... if they were, the traditional 50-50 or 60-40 split between artists & their gallery representatives only compounded problems faced by artists desiring to get their work in front of the public.

Also noting that the recent economic recession had left many a commercial storefront and mall retail space vacant, we agreed that the idea of staging several events/exhibitions throughout the year just might be a good idea. Central to our mutual cause were the ideas of a more "democratic" method of exhibiting art, devoid of the formality found in commercial galleries, devoid of the cheezy "art sales consultant" that, here, act more like used car or time-share salesmen. Also central to our hatching scheme was a much friendlier sales split between gallery & artist.

With all this in mind, serious planning ensued... and we are now very happy to announce the formation of a small collective coming together under the banner Gallerie Spontaneous!

When I say "small collective"... I mean SMALL! At the moment, it's just the two of us. We are reaching out to collect other like-minded individuals and artists interested in furthering this idea of one or two day exhibitions throughout the year, to be held in virtually any venue that will have us.

For our first, formal outing, Gallerie Spontaneous has teamed up with the generous folks producing the annual Maui Agricultural Festival. The Ag Fest has agreed to donate to us a large tent space in which to mount or very first exhibition during the event, falling on the first Saturday in April.

The theme of our first exhibit is: Fertile Ground. Here's the Gallerie Spontaneous Mission Statement and the Prospectus for the exhibit Fertile Ground:

Gallerie Spontaneous is a small, growing collective of like-minded artists & individuals with the goal of advocating for the arts and for the artists of Maui County, both emerging and established. Recognizing the need for artists to affordably exhibit & show works they create that may be incompatible with commercial galleries & exhibition spaces, the collective was formed with the intention of mounting one-day, juried exhibitions at various locations around the island throughout the year.

For our first formal outing, Gallerie Spontaneous has partnered with the Maui County Agricultural Festival to create a “spontaneous,” one-day exhibition during the event at the Maui Tropical Plantation, on Saturday, April 6, 2013.
The theme of our first exhibition is “Fertile Ground.”

For more information or to get involved with Gallerie Spontaneous, please contact organizers:


You can find out more about Gallerie Spontaneous on Facebook:

To get involved in this or future events planning and/or participation... please get in touch with us!

Posted by Tony Novak-Clifford at 11:43 AM No comments: