Mad & hectic month April has turned out to be. The arrival & departure of Master D, elevating the art of couch-surfing to professional levels for three week was quickly followed by the arrival of parents, visiting from the East Coast, still in residence until monday evening.

In between acting as host, tour guide & dotting eldest son, there have been projects to shoot, projects to scout & pre-produce and an exciting new project that promises to be stimulating, creative & long-term on may different levels. Can't go into that lat bit just yet... patience.

Yesterday, a meeting with entrepreneur, restaurateur & chef with the golden touch - Mark Ellman, to discuss plans and tour the building slated for his next exciting venue. Meeting over a several salads (one especially tasty concoction featuring grilled octopus) in his acclaimed Honu Maui venue ("Honu" is the Hawaiian word for "turtle"), a large, live specimen was spotted basking on the rocks just outside the dining room. 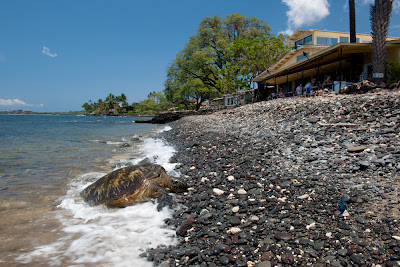 Then - it was over to the old building next door, awaiting permit approval and redesign as the newest addition to Mark's dining dynasty. Especially interesting was an old vault used in old plantation days to keep payroll safe. 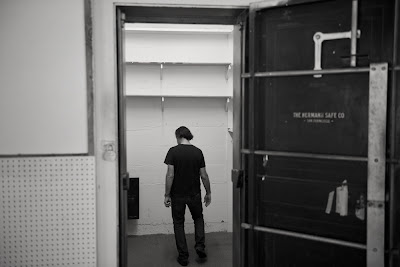 Today I was asked to give a presentation to the University of Hawaii Culinary Arts Academy on alternative industries in and around the culinary arts. My talk... to a dozen or so 1st year students focused on food photography & food styling. Armed with a handful of videos showcasing an array of "tricks" employed by stylists, the students were attentive, involved and curious. 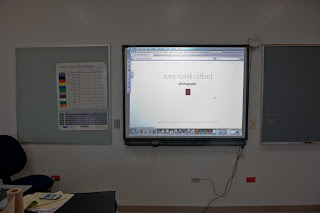 Surprised was I to enter the classroom to find a projection screen already illuminated with my logo and website opening page. 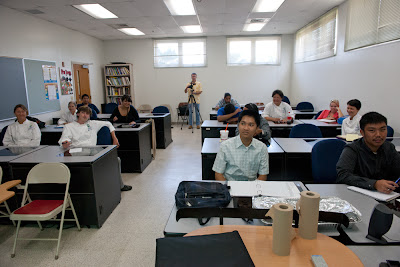 And now, it's nearly the end of friday. Plans for a sunset, beachside meal with the parents at the North Shore's finest eatery are in store. I'm free for the rest of the weekend... for the first time in nearly a month.

Posted by Tony Novak-Clifford at 6:34 PM No comments:

This was the note I found scrawled across my wall at another popular social media platform by a fellow (but not a fellow) photographer friend. It made my day.

One never knows just how one's words will be taken, especially when it comes to the world of social media. A blog post, a Facebook posting, a quick comment left at someone else's... the words themselves, written across a page or computer screen lack nuance, inflections and the vocal dynamics that often convey the meaning or intent of said words with a bit more clarity.

Those that know me well enough understand that I live with my tongue firmly planted in cheek and my head firmly up my ass in the clouds. Humor is my defense, my weapon, my coping mechanism. For me, there is nearly nothing that is off limits. No sacred cows. It's always great to find other's that can share the joke and then reach out as the friend who wrote the note above did..

And speaking of reaching out, I've been doing that quite a bit recently... contacting photographers I have never met to tell them the many ways that their work has lifted me, inspired me, made me laugh, made me cry. Some of those whom I've contacted are BIG industry names. Most took the effort to respond with kindness, encouragement & engage in dialog. How refreshing is that? Thank you one & all!

Which brings us to the idea of "thanks". One afternoon last week,  in the midst of a particularly trying day, a friend emailed me a poem... not just any poem, mind you. This one was a poem by W.S Merwin, noted author & island resident... a man whom I have had the honor to engage with and even photograph on several occasions. The poem's arrival came at an auspicious time and spoke to me... mirrored what has been my only prayer for several years now. I have passed this on to a couple of other's since it's arrival in my email box. I now share it with you:

Listen
with the night falling we are saying thank you
we are stopping on the bridges to bow for the railings
we are running out of the glass rooms
with our mouths full of food to look at the sky
and say thank you
we are standing by the water looking out
in different directions.

~W. S. Merwin published over twenty books of poetry, including the recent collections The Shadow of Sirius which won the 2009 Pulitzer Prize; Present Company (Copper Canyon, 2007); Migration: New & Selected Poems (2005) which won the 2005 National Book Award; The Pupil (2002); The River Sound (1999), which was named a New York Times Notable Book of the Year; Flower and Hand: Poems 1977-1983 (1997); The Vixen (1996); and Travels (1993), which received the Lenore Marshall Poetry Prize. He has also published nearly twenty books of translation, including Sir Gawain and the Green Knight (2004) and Dante’s Purgatorio, and numerous plays and books of prose.


Posted by Tony Novak-Clifford at 8:16 PM No comments: 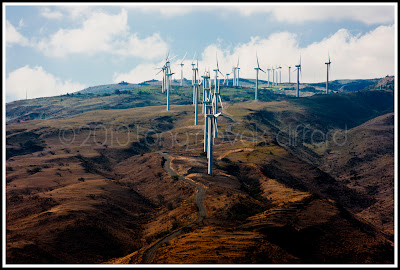 A rare & windless day at sea provided this alternative view of the island's great white hope(s) for renewable, affordable energy. So far, my energy bills have yet to see any benefits.
Posted by Tony Novak-Clifford at 12:30 PM No comments: