Call came in to shoot lifestyle images
aboard a private jet sitting momentarily idle
on our local runway. Amazing cooperation with
very little notice from the crew at
Air Service Hawaii, allowing us to take over
their VIP lounge for hair & makeup(courtesy of
Trisha Joseph)and were so helpful in so many
other ways, including actually turning the plane
around 180 degrees in order to take full advantage
of the gorgeous morning light, crisp blue
skies and unobstructed views of West
Maui Mountains.

Captain & Co-Captain even showed up at 7am
dressed in black suit & tie on a blistering
July morning to fire up enough engine power
to keep the cabin interior cool and interior
lighting operable. Thank you so very much!

Posted by Tony Novak-Clifford at 7:54 PM No comments: 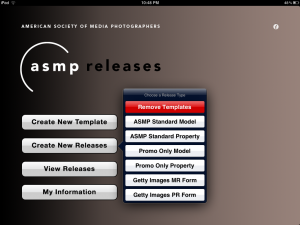 The American Society of Media Photographers
has just made keeping track of & organizing Model
& Property Releases a little bit easier.

Released just a little over a week ago, this
new ASMP app available for iPhone
&iPad (versions for Android & other platforms
are in the works)features templates allowing you to
create Standard ASMP Releases for talent &
property as well as ASMP's new "Promo Only"
release for self-promotional work and the stock
industry gold standard wording from Getty Images.

One of the great new features is the ability
to embed photos of talent & property, taken with the
mobile device, into the release form... making
it even easier to keep track of things
once assignments are completed. Another
very cool thing about the app is that
models & property owners can sign the release
right on the mobile device using a finger or stylus.

There appear to be a few bugs yet to work
out (my version hasn't been able to embed photos
in release forms and saves them as separate documents)
and there is a bit of a learning curve required in order
to make full use of the app. I've only just begun
to play with mine and have found it a bit time consuming
when it comes to entering data to create templates
of info to be embedded in releases you create, so
I recommend that you spend some time learning how
use the app and then enter client/assignment & personal
information into templates well before you
arrive at the assignment.

Hopefully, there will soon be updates released
that will fix the photo embedding problem and perhaps
make things just a bit more intuitive to use, but
this is certainly a fine start and a very
useful app for any still/motion photographer
needing releases for either
assignment or stock work.

Find out more about the app and how to download
your FREE version here:

Posted by Tony Novak-Clifford at 3:13 PM No comments: 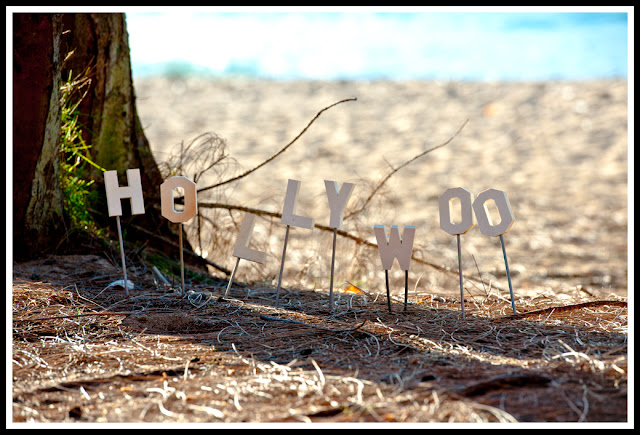 Someone has stolen the "D".

Found myself in the midst of festive
beachside gathering of old friends, with a few
new ones thrown into the mix, last Sunday's eve
as we gathered to honor, mock and celebrate
the birthday of the woman who, some would say
(well, she would say), gave my career a jump-start
back in those early days when I worked out of
a rented closet darkroom at the Lahaina News
offices.

On hand were a couple of charming Whippet
pups, a State Senator and a handful of
the usual suspects. Champagne flowed,
T manned the BBQ, plying us with grilled
prawns, juicy sausages and lots of other
delicious goodies.

Birthday girl "G" walked the red carpet,
entered the "Celebrity Zone" and took up
residence on her "Producer's" throne. 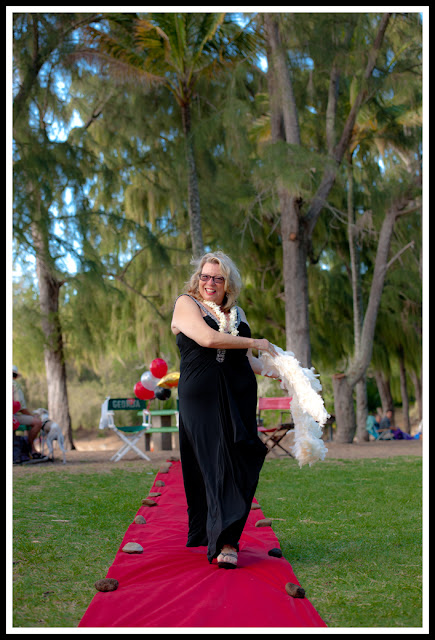 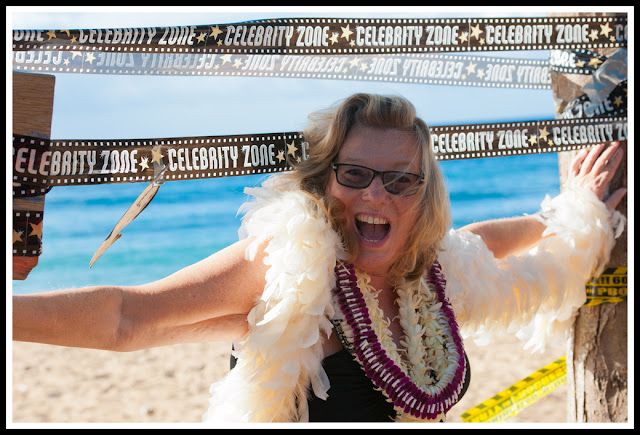 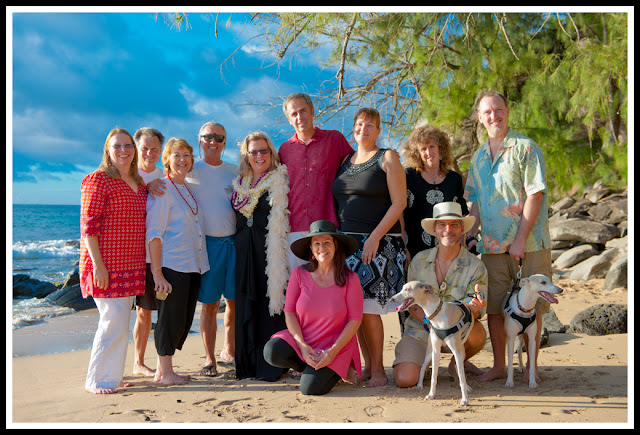 Posted by Tony Novak-Clifford at 8:03 PM No comments: 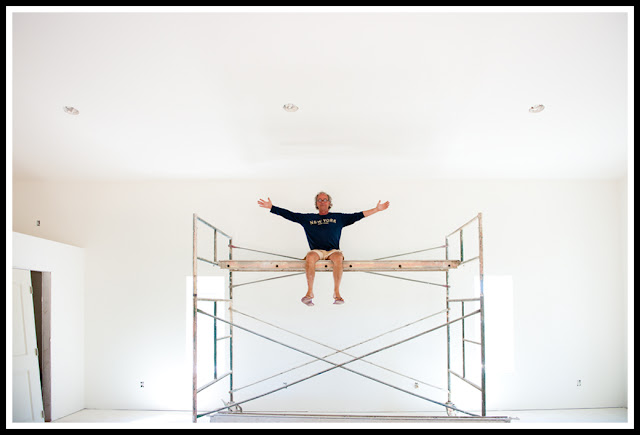 Space feels massive. It won't once
I move all the gear & office in. Amazing
natural light... much better than planned.
Daylight shooting will be awesome when
appropriate.

Move-in should begin by next week's
end!

Posted by Tony Novak-Clifford at 11:58 AM No comments: 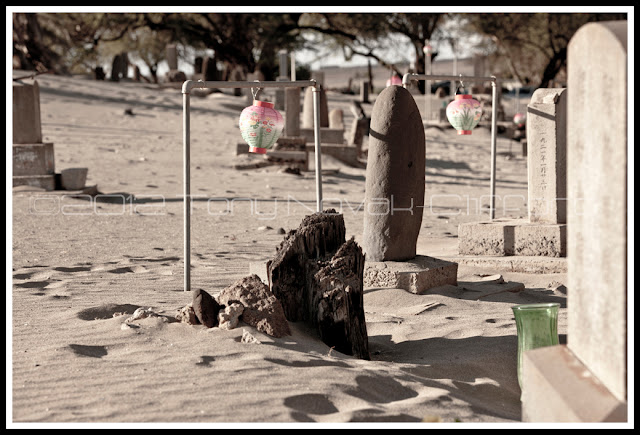 The summer season is
upon us in full swing,
though the past two months of cooler
than normal temperatures and
unseasonable steady rains make things seem
a little more like we are still in the
throes of winter.

So... when the opportunity to escape
the rains of the eastern island slopes
presented itself last saturday evening,
I gladly grabbed cameras & headed to the
island's west side for what is arguably
the most colorful and joyous ceremony on
the island events calendar.

Obon(sometimes simply called "Bon")season
has begun. A buddhist-confucian custom
which brings families together to honor spirits
of the ancestors, cleaning grave sites and preparing
for the spirits return to family altars. 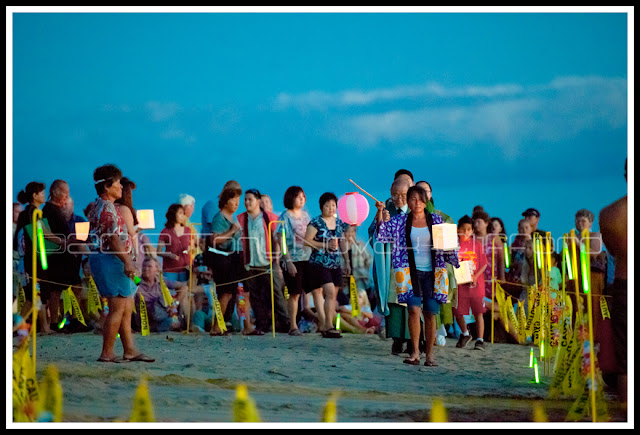 quite the opposite is in evidence, at least the
Jodo Buddhist Mission in Lahaina, an elaborate
shrine featuring multi-roofed pagodas, the largest
bronze Buddha sculpture outside of Japan and home
to the only floating lantern ceremony
held on Maui.

Things begin with rituals held for temple
members inside one of two shrines housed
at the mission site. As the sun begins to sink
into the western ocean, the faithful take up glowing
paper lanterns embellished with kanji script, drawings,
notes and prayers for departed loved ones. lantern bearers
then begin a procession to the lagoon edge
fronting the temple, where waiting attendants
take each lantern and place them on small
rafts to be used later in the proceedings
to ferry the illuminated lanterns out to the
edge of the reef where each lantern is
carefully set adrift to
follow tides & current. 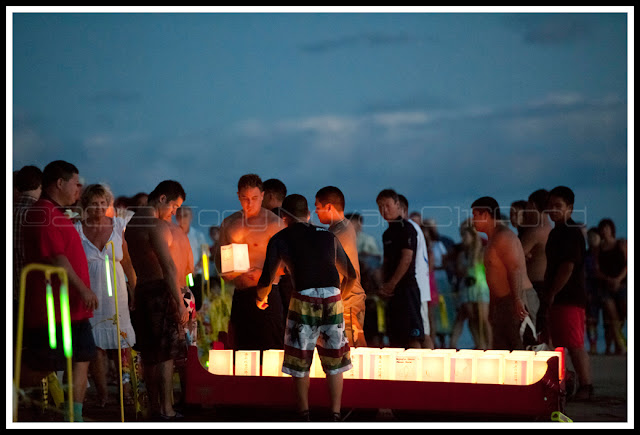 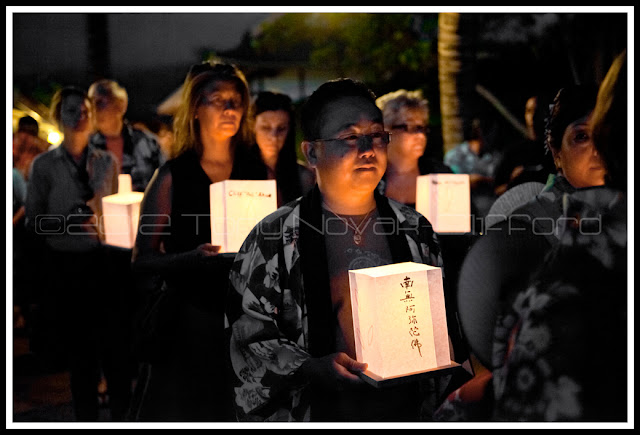 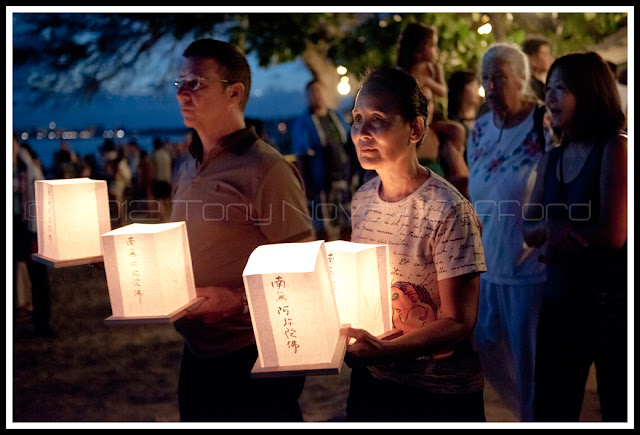 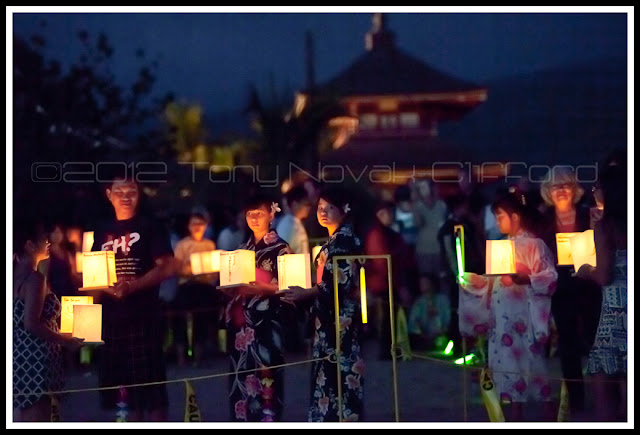 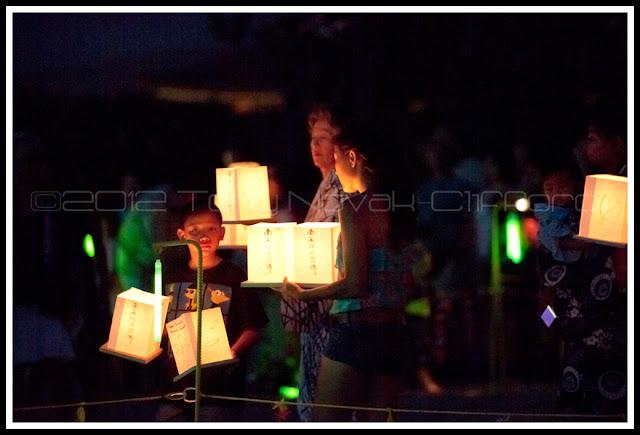 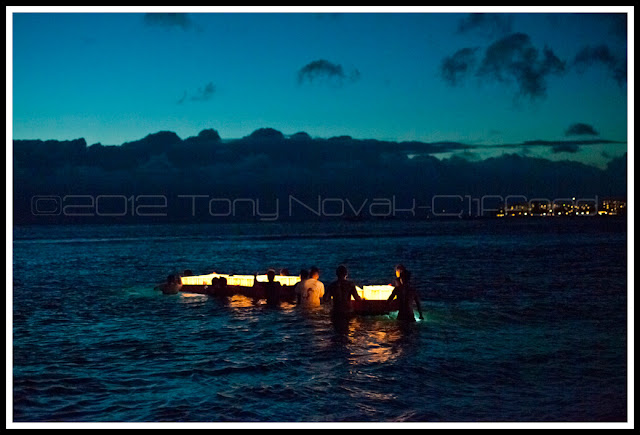 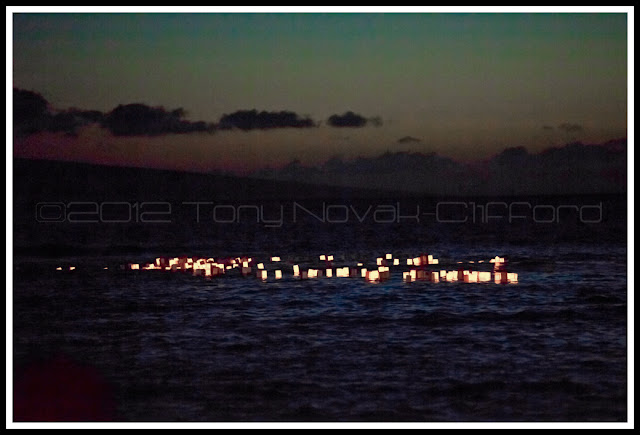 Once lanterns are committed to the sea,
the real fun begins with the Obon dance.
Revelers don colorful kimonos and gather 'round
a brightly lit tower set up on the grounds
from which emanates the steady drumbeat
of the Taiko accompanied by taped music
traditional to Japan. Dancers move en-masse
around the tower using simple, prescribed
steps, hand gestures & claps. Everyone is
welcome, the dance is quite easy to pick-up
once you've observed a couple of spins around
the tower. Ringing the circle of dance, the
atmosphere is more likened to a country fair
with delicious food stalls selling prepared
delicacies, candies, shave ice. Teens hide in the
shadows, flirting shyly. Temple members, tourists
and non-buddhist community members alike
all come together for the celebration. 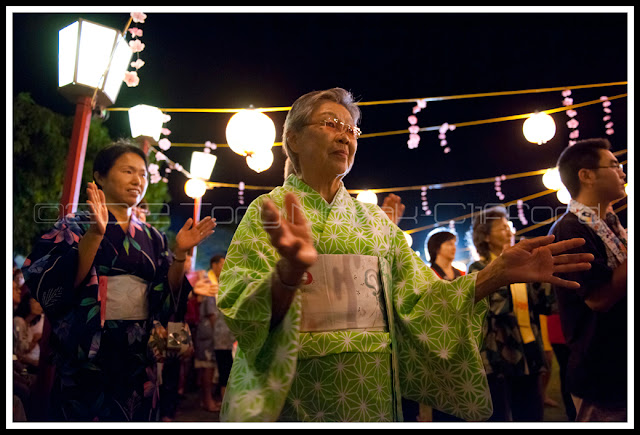 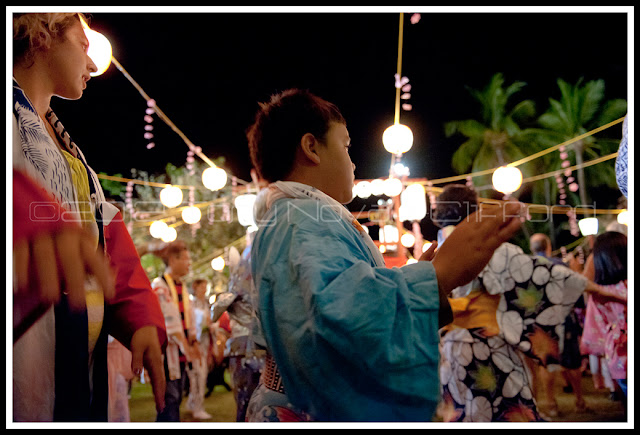 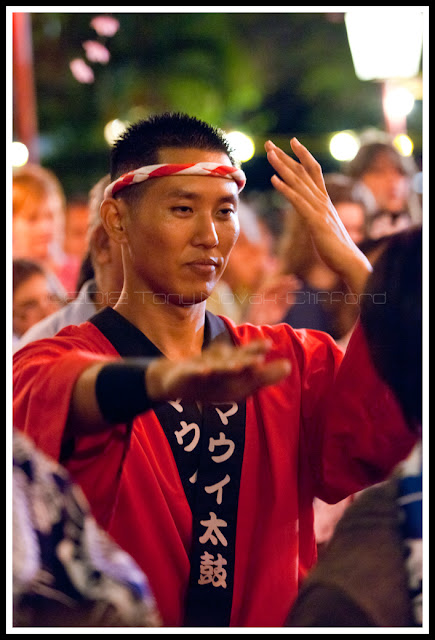 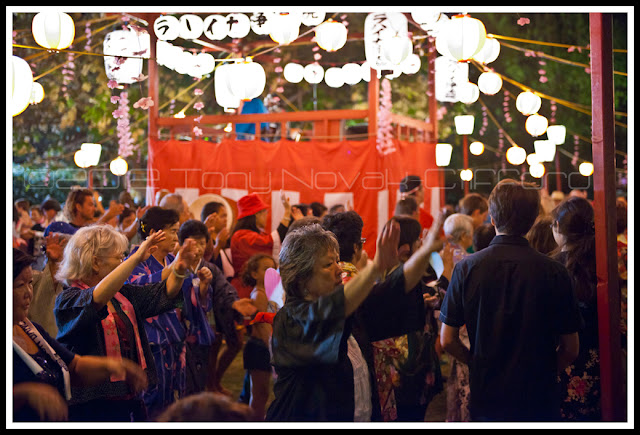 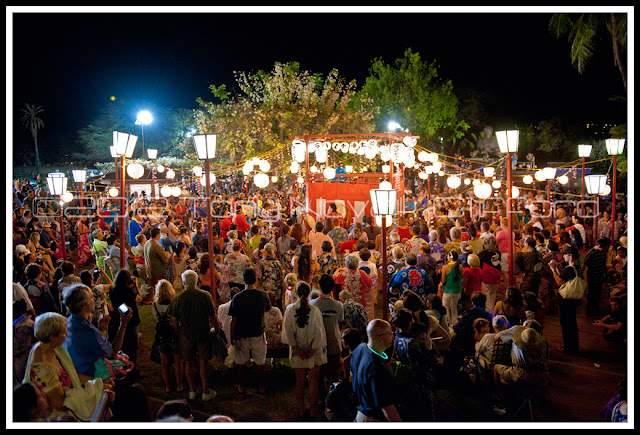 Obon season continues for the next several
weeks with dances being held each weekend
at various temples around the island.
Check your local listings for a schedule
and then get out and enjoy one of the
truly great ways to spend summer's
evening in Hawaii!
Posted by Tony Novak-Clifford at 4:28 PM No comments: 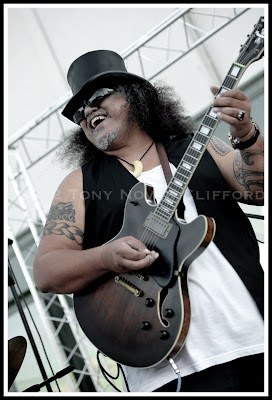 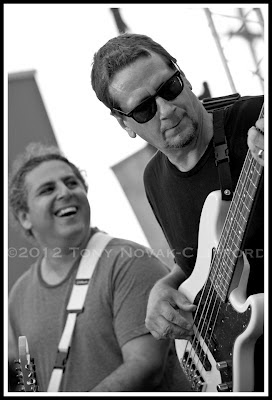 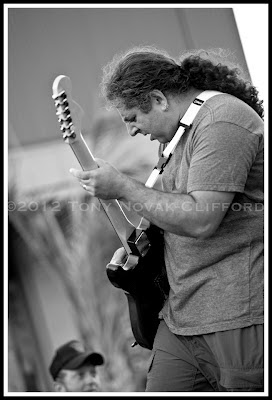 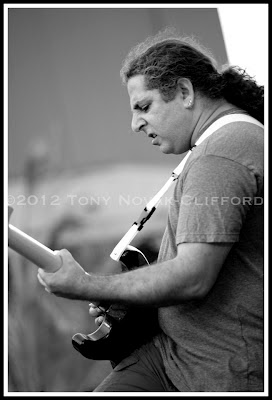 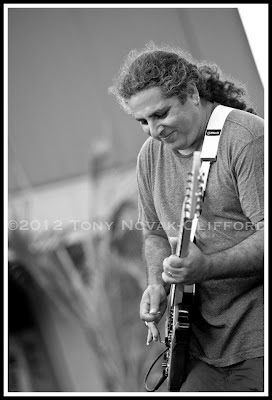 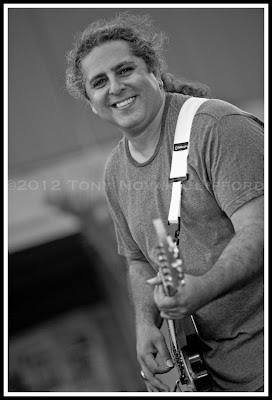 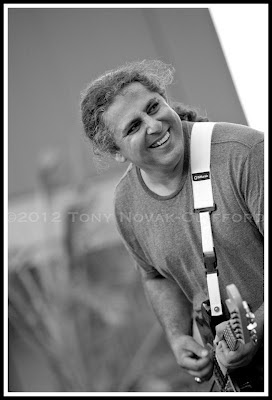 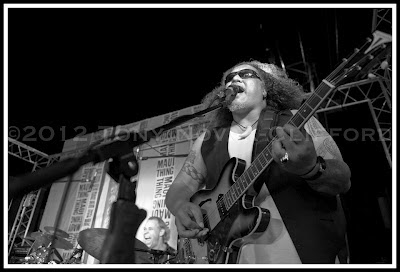 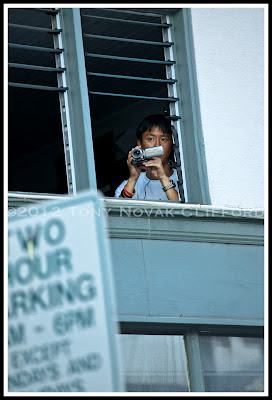 Looks to me like everyone had a pretty good time...

Posted by Tony Novak-Clifford at 1:15 PM No comments: