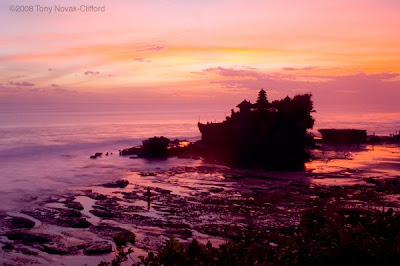 After three days in the south part of the island, I've made my way to the interior mountain village of Ubud, often referred to as Bali's Culture Capitol. The temperatures here are cooler, the pace slower and considerably less trendy. Much of my time so far has been spent catching up with old friends and meeting new ones. By chance, I joined friends at the Fly Cafe the day before yesterday where I met travel photographer extrodinaire and Getty contributor Glen Allison, http://glenallison.com,founder of the Stock Artists Alliance (SAA). Greg is building a fantasy home on the ridge overlooking the Tjampuan River just on the outskirts of town. We talked for quite a while as he showed me photos of the construction progress, discussed the state of the stock industry and the wretched Orphan Works legislation about to be debated in Congress.

There have been a couple of other chance encounters too strange to go into here, at least not until I can wrap my own mind around them. Suffice to say that magic is in the air and things unexplainable are happening all around me.

The above photograph is the temple Pura Tanah Lot, one of Bali's four protective directional temples, guarding the southwestern coastline from the forces of evil. A popular destination for tourists who come for dramatic sunsets, the place was a crawling with tourists, most of them from the Island of Java and taking their holiday in Bali.
Posted by Tony Novak-Clifford at 5:55 PM

Juicy Sunset Tony. Good to know that Bali is abuzz with kryptomagizic. Volcanic magic is in the air here on Maui.....it's called Vog. Enjoy Bali and please tell Adi that Gwen, Miles and Scott send their Aloha.