Evolution Of A Poster: Cow Egg

A few weeks ago, I was sitting around having a chin-wag session with music feak, amazing graphic designer and owner of Dogtowne Design, Scott Johnson. During our chat, Scott & I began brainstorming ideas for iconic, surreal images to be used to promote the return of West Virginia bluegrass artists, Brown Chicken Brown Cow String Band. Since the band had derived their name from a joke (bow-chika-bow-bow)and their frontman & fiddler, Zander, is given over to cornpone patter between tunes, Scott & I decided that the image needed to be a visual joke, surreal in nature, and... most of all, eye-catching.
After several minutes of idea tossing and head-scratching, the concept of the "COW EGG" was hatched. Last thursday, in anticipation of the bands first public Maui performance since their return from touring the mainland, Scott & I shifted into high-gear to "git 'er done" as the BCBCSB guys might say. Off to the local hardware/garden store I went in search of flats of fine-leafed grass sod and some white spray paint to make clouds. Then off to the supermarket for a dozen eggs to complete the items necessary for the shoot.
Below, you will find my studio shot (L) prior to Scott getting his grubby little fingers on it. Once in his hands, Scott masterfully managed to strip real enough looking cow fur onto the egg, add striking text graphics and, VIOLA!, a cow egg was born.
Don't miss Brown Chicken Brown Brown Cow String band's return to Maui this friday night at Stella Blues in Kihei. The show starts at 9:00pm. 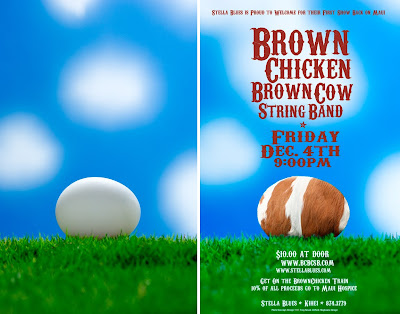 Posted by Tony Novak-Clifford at 2:17 PM No comments:

The American Society of Media Photographers has launched a new website outlining & defining standards & best practices for all aspects of the digital photography workflow, from color management to file delivery, for the working photographer. Long in the forefront (and often mired in internal politics), ASMP's newest innovation towards education and standardization of business practices is the result of a two year effort by members Richard Anderson & Peter Krogh and debuted earlier this week during the FotoweekDC events. dpBestflow, in addition to the most informative website, will also include a book/manual as well as a travelling seminar series.
As we are all digital photographers in some form or another these days, spend some time at the website... learn the best practices and guidelines and apply them to the way you handle your d-workflow. You can find dpBestflow.org here:
http:dpbestflow.org
Posted by Tony Novak-Clifford at 4:26 PM No comments:

End Of An Era 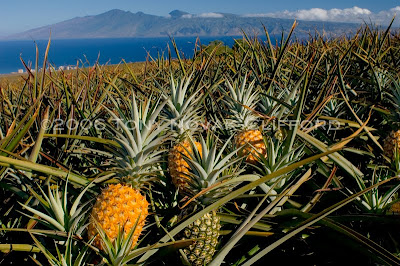 Maui Land & Pineapple Company, one of the state's last & largest pineapple producers is the latest casualty of Hawaii's strapped economy. In an announcement made earlier this week, MLP said they would cease all pineapple operations by the end of this year. The plantation shutdown will further increase the growing number of unemployed workers here on the Valley Isle with layoffs numbering 285 employees. These unemployed will not only include the field workers, but also workers in the company's Kahului cannery and fresh fruit distribution operations, conservation and critical watershed management teams and office administrators.
Earlier today, further information was released about the company's dire financial condition, claiming losses of $92.9 million this year alone. You can read the full story here.
During the past several years, plantation operations had already undergone severe cutbacks, especially in the West Maui/Honolua Plantations, where agricultural lands have been taken out of production and developed as luxury home sites. Further taxing the company's viability was the demolition of the old Kapalua Bay Hotel and the construction on that site of a luxury condominium project and spa, the condominium development a joint venture with Ritz Carlton Hotels.
Both Maui Land & Pineapple Company, and it's resort arm, Kapalua Land Company have been long-term, steady & loyal clients for the past 20 years. This week's news brings further cause for an increasing feeling of fear & loathing for the immediate future.
Pineapple has long been identified with Hawaii and the Kapalua Resort has long been, in my opinion, the most beautiful of all of Maui's destination resort areas. Let's hope and pray they continue to exist.
Posted by Tony Novak-Clifford at 4:42 PM No comments: