The Dress Looks Nice On You

Sufjan Stevens performs The Dress Looks Nice On You.
Posted by Tony Novak-Clifford at 12:02 AM No comments: 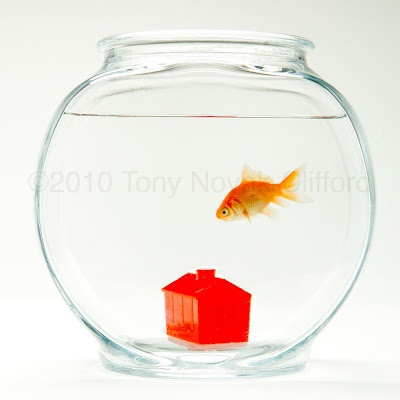 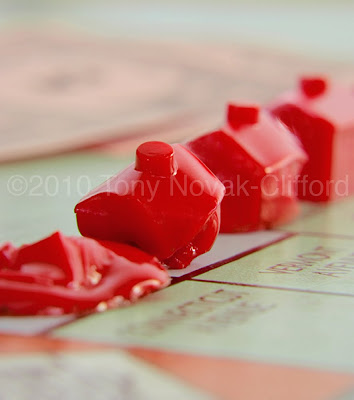 Regular readers of this blog should recognize the name Leslie Burns Dell'Acqua, law student, photographer's business consultant and author of the always excellent Burns Auto Parts website & blog, a place where there is no information about cars, auto parts or anything even remotely automotive related. What you will find there is lots of helpful advice and information about the business of photography.
Lately, you will even find a little bit more... as a few weeks ago, Leslie began the first of what promises to be a series of fictitious editorial "assignments" to participate in. The first one I missed, regretfully, and centered on the theme "PEACE". On January 29th, the second of these "assignments" was announced. For this assignment, Leslie borrowed a news story on the current mortgage crisis and asks readers of her blog to submit photography to illustrate the article. Submissions must be emailed to Leslie by the 11:59PM, February 27th deadline. You can find the details and submission guidelines for this "assignment" by clicking HERE. I'd love to see some of our local Hawaii talent and readers of this blog participate, so get cracking... there's only 8 days left to turn in your submissions.
I promised myself, after missing the first assignment deadline, that I would make a concerted effort to turn in a photograph for the current assignment. In fact, I turned in two, designating the fishbowl shot as my "official" entry. As the article this assignment was based on opened with and continually mentioned the idea of mortgages being "underwater", I felt this image was more true to the story the assignment was based on. What fun it is to attempt to wrangle a live goldfish into position. Goldfish are certainly NOT one of God's more cooperative creatures. (Disclaimer: No goldfish were harmed in the execution of this photograph. This one swims happily in his little bowl beside me as I peck out this screed.)
Another phrase constantly being thrown around by the media these days is "mortgage meltdown", on which the second image is based. This one was also fun... trying to figure out how to best melt those tiny plastic Monopoly® houses. First attempts using a propane blow torch ended up blackening the melted plastic too drastically, I felt. I finally settled upon a Pyrex® baking dish, the bottom sprayed with WD-40 (to prevent the melted plastic from sticking... sort of worked). Various times were tested with nuking in the studio microwave until the desired "melts" were achieved... the longest nuke time being about 20 minutes for the full melt.
Posted by Tony Novak-Clifford at 4:13 PM No comments:

NY-based editorial photographer Andrew Hetherington is the brains and energy behind the Whats the Jackanory? blog site. Unrelenting in his efforts to inform, entertain & enlighten, Andrew's latest video project, Dinner for Five Photographers is now beginning to appear in segments posted at the WTJ? site. So far, episodes I & II have been posted over the last couple of days. Each clip features an intimate, candid glimpse into the minds of the five participating photographers as they order, chew, laugh and wax poetic on a myriad of topics .
Episode I, posted yesterday, covers such illuminating topics as:
1) Don't Touch The Table
2) Time Management On The Shoot
3) Dress For Success
4) Eat Or Die
5) Hard Work Breeds Success
6) Now Is The Time
7) Mentoring, Interns, Kindness To Colleagues & Assistants
Episode II, posted this morning, covers:
1) The Book
2) Braised Beef
3) Balls
4) Dan Winters
5) Delivering The Edit
6) Obama Light
7) Middle Aged White Women
8) A Fanny Pack Can Save Your Life
Humorous, informative, even quirky... these short clips are well worth a few moments of your time. Find them Here.
Posted by Tony Novak-Clifford at 12:17 PM No comments:

Posted by Tony Novak-Clifford at 2:23 PM No comments:

Photographer's consultant cum law student Leslie Burns-Dell'Acqua has published yet another timely blog post today, providing much food for thought for those of us providing images to editorial clients in this new age of digital media. With printing & paper costs going through the roof (not to mention the important trend of being viewed as "green"), rising postage costs, falling advertising revenues diminished readership of hard-copy print as more and more editorial consumers turn to online delivery of their favorite reads, the shape of editorial content delivery is now changing rapidly and in a big way.
The video posted here is from the folks that bring us Wired magazine and deals with the publication's new electronic publication geared towards users of the recently unveiled iPad.
At the Burns Auto Parts Blog, Leslie writes:
"More importantly, note how they talk about this change is (very possibly) the one that will result in an experience users will want to pay for. Wired isn’t going to be giving their work away for free, it sounds like, even though there will be plenty of ads in the iPad edition.

Also note how they are encouraging sharing the content via social media tools. I’m assuming this means clips and links, not wholesale shifting of the content, but whatever it is, it means that your images will be seen by more and more people."

Yes... there is a small upside here... increased exposure of your work. Does that outweigh the obvious downside of some potential loss of control of your image/content distribution? Only time will tell, I suppose.
The point of Leslie's entry today is that we need to look at editorial pricing models NOW... the future is upon us. The folks at Wired seem to think that users of this new interactive media environment will be willing to pay for this new, enhanced experience. They also go on to say that the electronic forms of their publication will also be chocked full of advertising, the traditional revenue stream of print publications. Publications around the globe today are struggling for survival and have embraced electronic publishing as a new method of delivering the goods to readers. Subscriptions for online versions of their content may just be the model for salvation. It is, however, another source of revenue and once the economic downturn abates, could result in profitability beyond what had been previously realized prior to the downturn.
Good points for consideration, dialog and discussion among those of us working in the editorial realm.
You can read the blog HERE. And be sure to check out the video from Wired too.It appears directly above this entry.
Posted by Tony Novak-Clifford at 1:53 PM No comments:

I seem to be one of the few here in the Wailuku Business District that didn't receive the memo that today was a holiday... Presidents Day. Banks, Post Offices, Courts, State & County Buildings, etc. are all shut down for the day, which suits me just fine. No traffic, no calls, and a chance to get some much needed editing and paperwork completed without the usual distractions. So far, I managed to complete the final edit for the new CD project for Phil & Angela Benoit (the final shots having been finished last evening) and make the bank deposit. I've also managed to make my final selections for submission to ART MAUI, one of our state's most prestigious juried art exhibitions and always a source for weeks of controversy in the local art world afterwards. Future potential controversy aside, my three submissions have been selected and printed and now await transport to the frame shop. Let's pray they can get all three framed and ready by receiving day on Feb. 25th. It's been more than twenty years since I last submitted work for this show and I have some new work I am very excited about. Let's hope this year's juror, Ken Bushnell, feels the same way. Suddenly I'm feeling a need to get my personal, non-commercial work in front of potential patrons and this is certainly one of the best shows for that sort of opportunity.
And, in keeping with the holiday... I shall take advantage of the opportunity to post an outtake from a day I spent following former president George H.W. Bush when he visited the island back in 2005. Several days prior to the event, I received a call from the PR Director at one of Wailea's mega-resorts asking for some very personal information for a Secret Service background check. The client would not tell me who I was to be photographing when the appointed day arrived... everything was being kept very hush-hush. Certain I would fail the security check for any number of very good reasons, I turned over the info and forgot all about the possible assignment, figuring there was no way in hell I would make it through that sort of scrutiny. Strangely enough, a couple of days later, the PR Director called back and told me to be at the resort at the proscribed day & time. Still no word on who the subject was to be... I was told to "just be there and be ready".
OK... I am, if nothing else, a professional. I show up as directed. Shortly after my arrival, a motorcade of shiny, new SUV's pull up to the porte cochre of the hotel. From those SUV's came a small army of Secret Service agents, all dressed in matching Hilo Hattie's blue floral aloha shirts, shorts, black socks & black wing-tip shoes. Each agent sported a wire dangling from their ear. Ostensibly, we can assume that the hideous aloha attire was an attempt to blend in and appear inconspicuous. Word, fellas... you all stuck out like a sore thumb.
Anyway... after "securing" the immediate area, one of the agents signaled what must have been the "all clear" and out of one of the center SUV's, former President Bush stepped out into the sunlight, stretched his legs and proceeded forward for a quick meet-n-greet with the small group of assembled hotel administrators. I spent the rest of the afternoon following the President around, snapping pics of him with VIP's and getting oriented to his new tropical surroundings.
The funny thing about this whole event is that my mother, who has never really quite understood what it was that I do for a living, was now suddenly very proud and apparently spent the next week bragging to anyone who would listen about how her son had gotten the opportunity to hang out & photograph an ex-President.
Finally, some parental validation! 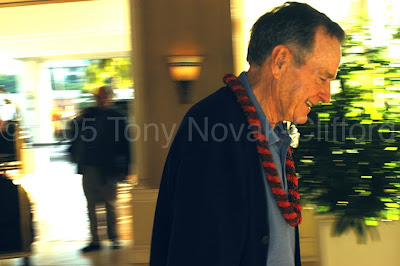 Posted by Tony Novak-Clifford at 4:44 PM No comments: 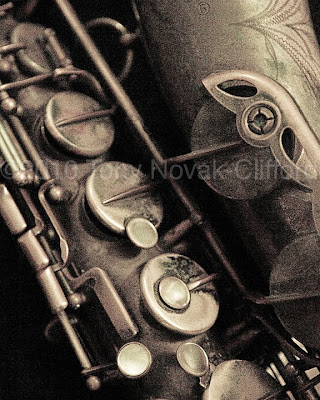 In the recording studio this afternoon with Phil & Angela Benoit, reed & wind player John Zangrando, Flugelhorn player Max and bassist & Musical Director Marcus Johnson as finishing tracks were being laid down for the Benoit's latest recording... to be released later this year.
The mission: To capture some "journalistic" style images of the musicians at work for inclusion in the final cover packaging. The main recording booth was filled with John Z's vintage horns, strewn about in every direction. This horn, with it's worn & tarnished brass, caught my attention.
Posted by Tony Novak-Clifford at 4:37 PM No comments:

I Am Instantly Slayed

Posted by Tony Novak-Clifford at 4:20 PM No comments: