This Is F-ing Awesome! 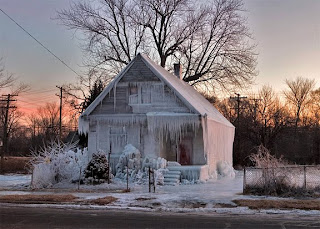 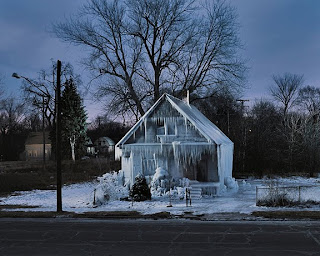 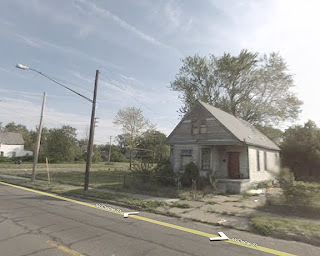 This morning's blog reading turned up this fascinating story about an art project taking place this winter in a blighted part of Detroit, NY. Thanks to James Ponerantz, author of the A Photo Student Blog for the heads up on the project.


The Ice House Detroit Project is a collaborative effort by architect Matthew Radune & photographer Gregory Holm in Detroit, New York. Planned as both an architectural installation as well as a social change project, the two collaborators took one of 20,000 abandoned houses in the area and, over the course of several days, painstakingly encased the entire house in ice using industrial sized hoses attached to either a portable water tanker truck or a nearby hydrant. The results... an eyesore turned into magnificent dreamscape. From Art in America, Daniel Fuller wrote on 3/20/10:


The vacant home they covered with ice was a grimy white house with a broken chain fence, plywood-covered windows, and shrubs reminiscent of something Gordon Matta-Clark might have chosen to deconstruct. For several bitter cold weeks, often from dawn to dawn, the duo could be found circling the house with an industrial hose system hooked up to either a water tanker truck or the street’s hydrant. The visual result was stunning. Spraying the sharply pitched roof, the water flowed down the sides, freezing the porch, the front steps and the unruly horticulture around the house. The landscape glistened in the reflection of the sun, and icicles formed like stalactites, with the emotional indexical resonance of a Pollock drip or immersive vertical of a Barnett Newman zip. The ice was so thick that blades of grass began to resemble stubby, glassy fingers.

Neighborhood residents flocked to have their photos taken in front of the house. The architectural installation morphed into a destination, an informal gathering spot for a cup of hot chocolate and conversations. It is easy for exhibitions in blighted areas to feel condescending, and this one took great risks by looking like the outsider art intallations-cum-tourist attractions that dot the Midwest. But Holm and Radune ingratiated themselves early by opened lines of dialogue and funding a food and clothing drive for those in need. Consummate hosts, neighbors responded by serving as community liaisons, quick with an account of the districts heydays and a verbal tour of the surroundings.

You can learn more about the project by going to the Ice House Detroit Blog found HERE.

Posted by Tony Novak-Clifford at 3:08 PM No comments: 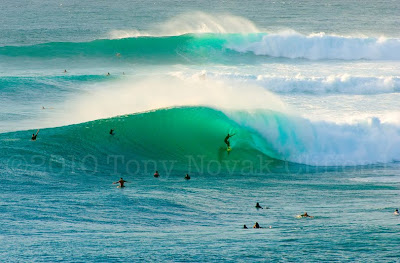 Wednesday afternoon I was over on the upper-west side of the island working on an assignment for Via Magazine. Needing to capture some dramatic scenic images of world-famous Honolua Bay, I was thrilled to find big, perfect, hollow waves also. After completing my assignment work, I joined several other sport photographers on the cliffside overlook where we were able to shoot straight into the breaking barrels... cool stuff!
Posted by Tony Novak-Clifford at 3:33 PM 1 comment: 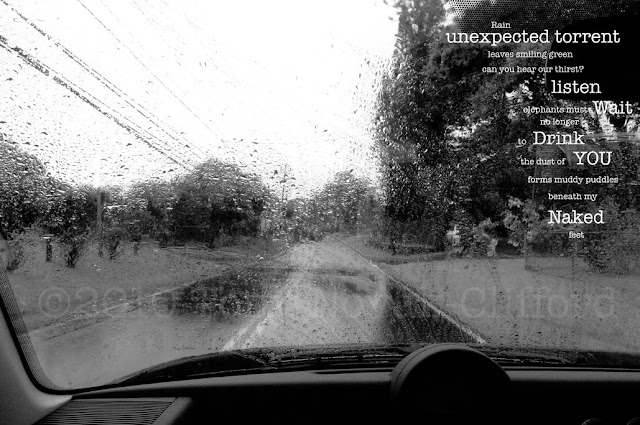 Posted by Tony Novak-Clifford at 1:25 PM No comments:

The Throwdowns are everywhere these days. I had the opportunity to work loosely with them again as they stormed the stage to lend their considerable collective talents at Barryfest 2010, the annual all day concert & fundraiser for Maui's best listener-supported, non-commercial radio station, Manao Radio 91.5 FM. They KILLED! 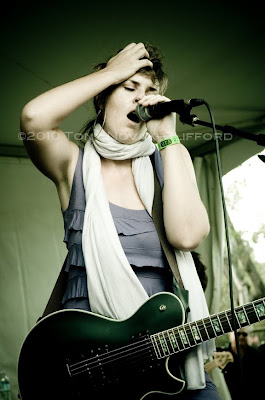 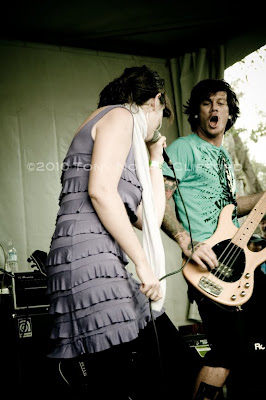 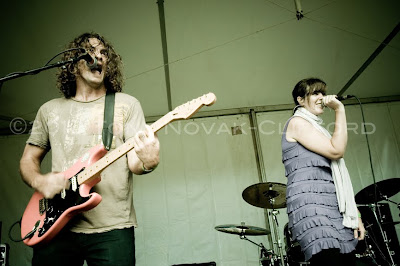 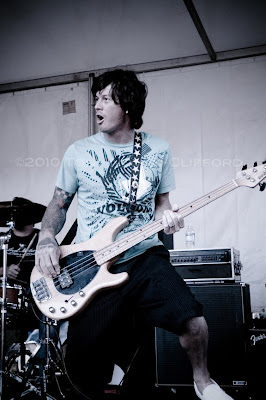 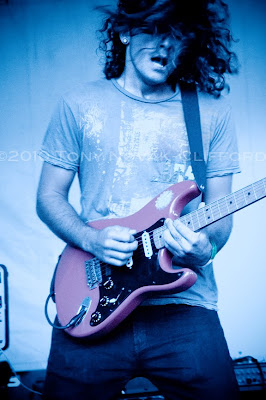 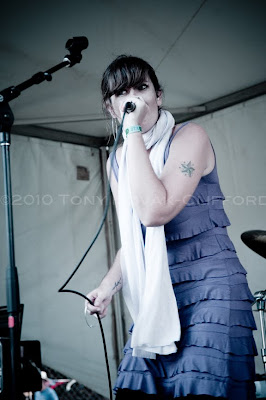 Posted by Tony Novak-Clifford at 3:14 PM No comments: 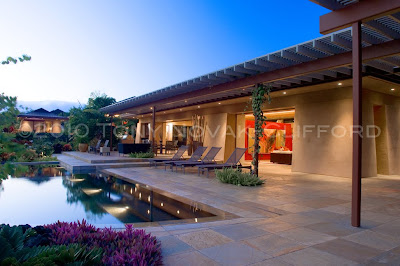 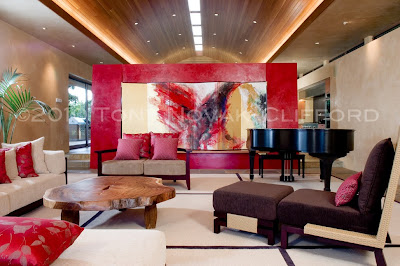 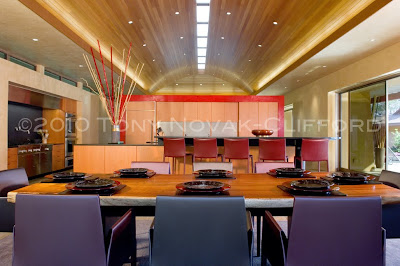 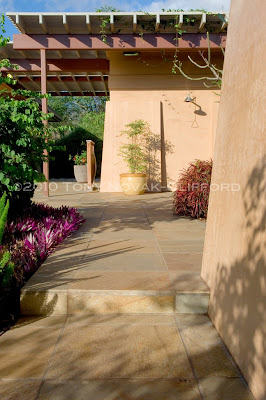 Over the past couple of days, both this blog and myself celebrated yet another lap around the sun. I spent my celebration time ensconced in luxury digs at a relatively remote part of the south shore coast, capturing architectural images for an architect/client's portfolio. Amazing property, amazing residential design incorporating the best of southeast asian "pod" design using modern materials, beautiful italian plaster wall finishes inside & out, tasteful & minimalist interior design, fabulous art... all in all, this was one of the most interestingly designed homes I have had the opportunity to work on.
Large, open interior spaces with lots of great, installed lighting plus bright exterior ambient daylight made for very demanding lighting scenarios. My assistant and I spent a total of 12 & 1/2 hours working on the first day of production and returned yesterday to put in another 5 hours to finish up the project.
Above are a few of the finished images.
Posted by Tony Novak-Clifford at 5:14 PM No comments: 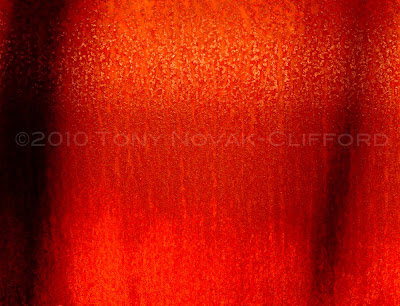 This morning I received a gift of inspiration, an early remembrance of the day I entered the world, the day I became flesh, a counting of yet another year past.
The gift? A DVD of the incredibly beautiful documentary film Heima. The title, translated from it's native Icelandic to English, means "Home" and documents a series of 2006 performances and behind-the-scenes glimpses into the lives of the members of Sigur Ros, Iceland's phenomenal post-rock ensemble, as they return to their native soil, triumphant after having toured the world. The music is peculiar... gorgeous, ethereal, often melancholic... pulling liberally from the traditions of chamber music, rock & roll and lavish orchestral works. Guitarist/multi-instrumentalist/singer Jonsi's high falsetto weaves in and out of the heavenly compositions using a mixture of his native Icelandic and nonsense syllables which he dubs "Hopelandic".
Throughout the film, lush images of the raw & pastoral Icelandic landscape are seamlessly woven together with cameos of the members discussing their craft, their music, their love of their homeland, their neighbors, friends & family, glimpses into their creative process and some simply devastating live performance footage.
Never before have I seen a more perfect fusion of image and music.
Thank you.
Posted by Tony Novak-Clifford at 12:00 PM No comments:

It is light that reveals, light that obscures, light that communicates. It is light I "listen" to. The light late in the day has a distinct quality, as it fades toward the darkness of evening. After sunset there is a gentle leaving of the light, the air begins to still, and a quiet descends. I see magic in the quiet light of dusk. I feel quite, yet intense energy in the natural elements of our habitat. A sense of magic prevails. A sense of mystery. It is a time for contemplation, for listening - a time for making photographs. - John Sexton
Posted by Tony Novak-Clifford at 11:50 AM No comments: 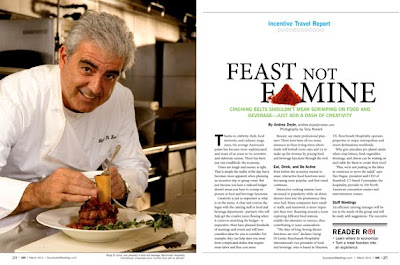 Awakened early saturday morning by ringing landline & mobile phones... concerned warnings from mainland friends & family alerting me to the threat of an Hawaiian tsunami headed our way from the massive earthquake in Chile . A few minutes later, Tsunami Warning sirens began shrieking island-wide. Best reports projected the first waves to begin slamming into the Big Island shortly after 11am. Kudos go out to the Pacific Disaster Warning Center... they were off by only 5-10 minutes in their projections.
While my home, family and animals were under no threat of being swept away by massive waves (we live at an elevation of approx. 1300 ft. on the slopes of the world's largest dormant volcano), my studio was another story. By 6:30 am, I had pumped up on caffeine and was speeding down the mountain towards the studio to retrieve cameras, computers, storage drives, guitars and other essential items in preparation for the worst. The first thing I noticed was the traffic... lots of it. Gas station lines extending 100 yards or more into the roads, grocery store & market parking lots filled to capacity, a few incidents of rude behavior on the roads, but all in all, a controlled sort of chaos taking place all around me.
Arriving at the studio, I quickly loaded my loot into the car and headed back up the mountain, opting for back roads to avoid the traffic congestion forming on the main highway leading up the volcano. The back roads were virtually empty, the morning warm, blue, still and beautiful, offering little indication of the potential for impending doom. Arriving back upcountry, all of the roadsides were lined with the parked cars of coastal dwellers who had fled to higher ground, many of them, as we tend to do in Hawaii, making the best of a potential bad situation by setting up tents, BBQ's (gotta have food, eh?), cots, sleeping bags, etc. and vying for the little available shade provided by roadside trees.
Back home, I unloaded the car, grabbed cameras and headed for a good position to watch for the impending disaster... a friend's house in Keokea provided a safe, 2000 ft. elevation observation post complete with live television feed of Hilo Bay's webcam on the Big Island, the projected point of first arrival of the waves. From here, I could clearly see both the north & south shore coasts from a safe distance.
Just minutes after the appointed hour, the televised webcam feed from Hilo showed signs of surge activity in Hilo Bay, first water being sucked out of the bay slowly and then shortly after that, water surging back in. Over the course of the next hour, several surge cycles occurred, each one increasing in volume & speed as water was sucked out of and then pushed back into the Bay. Radio & TV reports indicated that the same was happening here in Kahului Harbor on Maui's north-central coast. After an hour & a half or so of tense watching and waiting, it became apparent that the potential for devastating 9 ft. plus tsunami waves rocking our coasts had been averted. By mid-afternoon, the all clear was sounded and the caravans of displaced coastal residents began crawling back down the mountain, returning to their homes.
Again, kudos to the Pacific Disaster Warning Center for their early and accurate warnings, and to Maui residents & visitors alike, who overall behaved in a most orderly fashion and did what had to be done. Disaster averted!
The bad news was that, due to the threat of disaster, road & facility closures, etc., this year's ART MAUI judging of submitted art work and announcement of works accepted for the show would be delayed until mid-day on Sunday. Tense, relax and back to tense in less than half a day. Can't be helped I suppose, though I am quite certain that, this morning, there are several members of Maui's art community wishing that the judge for this year's show had been swept away and drowned in the sea .
Fortunately, I am not one of them. Of the two pieces I submitted to this year's show, one was accepted. Congratulations go out to all of the other artists making the cut. 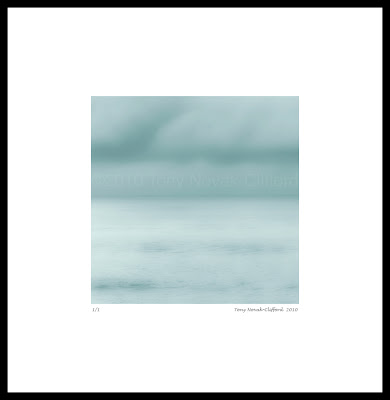 Posted by Tony Novak-Clifford at 2:37 PM No comments: