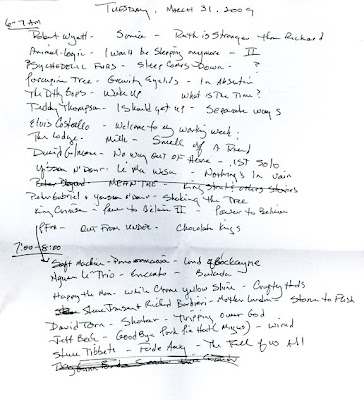 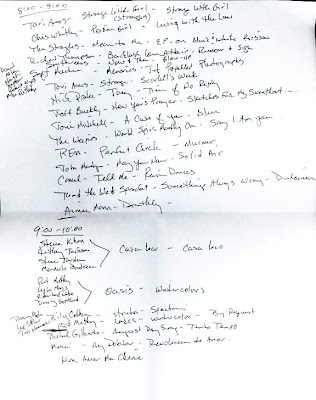 I have received several calls and requests recently for copies of the playlist from my Tuesday morning radio program The Academy of Errors. Those of you wanting to listen in can find it on the radio dial if you live here on Maui (West side and parts of South Maui don't get reception) by turning your radio to 91.5FM. Those of you out of signal's range can listen via live internet streaming by going to Manao Radio (click on link). The program airs every Tuesday morning from 6-10am Hawaii (CPT) time.
I haven't been saving playlists for quite some time now but figured the easiest way to clue you in to what was heard was to scan my sloppy, scribbled notes and post them here. Good luck deciphering my illegible handwriting!
Playlist for Tuesday, March 31, 2009:
Posted by Tony Novak-Clifford at 5:59 PM No comments:

New Direct Mail Promo In the Can... I Think. 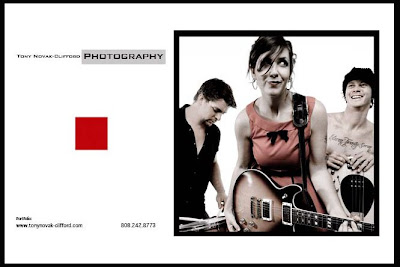 I have spent the last two days adding new work to the website here.
I've also finished (or at least I think I have... I'll live with it a few more days and see if I come up with anything else) the design for the next direct mail promo to go out in early April.
Posted by Tony Novak-Clifford at 1:34 PM No comments:

The State Of Stock and Other Chatty Chats

This morning I got an email from an old friend. She is an IT manager for a large graphics & packaging manufacturer based on the east coast. Here's the gist of her note:

intra-company website, or intranet. The higher-ups want it to be more

looking. Anyway, one of my jobs is to find pictures to go on some of the

pages. I've been on a site called www.inmagine.com which has TONS of

pics regarding business, but they're $50/pic. Do you know of any

websites that would have web page-ready pics (good resolution, etc),

that are free (and have business pics, or pics of industry,

She followed up a short time later with this:

"I just found [www.] photostogo[.com} - they have thousands."

To be fair... after I responded to her note about what a wretched request it was to make of someone, a friend no less, that derives a substantial part of his income from licensing stock images, she again followed up to report that her quest for images was simply to work towards an overall design that would meet with approval from the corporate higher-ups. The images, she explained, would only be used for FPO purposes and that the company had in the past licensed less generic imagery to fit their needs and may continue with that policy once the layout design is approved.

Posted by Tony Novak-Clifford at 1:22 PM No comments:

If you are a freelance photographer, writer or illustrator and have worked with any of the magazines published by Pacific Basin Communications, you will want to read the following letter I received from writer/editor Bill Harby over the weekend. Here's the text:
Aloha freelance writers, photographers and other colleagues:
We, the undersigned freelance writers and photographers working for Hawai‘i magazines, would like to alert you to a serious situation that could impact your livelihood.

Pacific Basin Communications publishes several magazines including Honolulu, Hawaii Business, Hawai‘i and Hawaii Home + Remodeling. The company is demanding that its freelance writers and photographers sign a contract that could put the frelancer in legal jeopardy. Because of that, and because we think the contract is unfair in other ways, some of us have refused to sign the contract. We ask you to consider whether you too might wish not to sign the contract.
Under #2, paragraph b, the contract states in part:

“After 12 months, all rights secured in the published Works shall revert to the Freelancer - except that already existing web pages may remain on PBC’s web sites and that PBC will be able to republish (and re-use in the same manner and to just as great an extent) the published Works or portions of it for archival, historical or editorial purposes.”

This word “editorial” may be construed to mean that, at any time in the future, Pacific Basin can re-publish your freelance story or photograph in any of its present or future publications without being obligated to pay you any additional fee. In contrast, other publishers pay additional fees for subsequent editorial use. And the “Fair Contracts Statement” from The Society of American Travel Writers (1,300+ members) says that it “believes in fair and equitable contracts for the services of its freelance members. Payment should be per use, whatever the form or medium.”

Pacific Basin doesn’t even have to notify you that it’s re-using your work.

Even worse than your loss of a fee and control of your work, this agreement could put you in legal jeopardy with another publisher. Here’s how: Pacific Basin’s contract demands exclusive use of your story or photo for 12 months. After that, you may resell your work to another publisher; but, according to Pacific Basin’s contract, the company retains the perpetual right to republish your work at any time in any of its publications, even ones that don’t currently exist.

However, if you subsequently sell the story or photo to another publisher, you will likely have to sign their contract stipulating that they now have exclusive rights to the story or photo for a defined length of time. But, if during this period of exclusivity, Pacific Basin exercises the clause in its contract to republish your work, you will have broken your agreement to grant the subsequent publisher exclusive rights to your work for that time.

This means that you can never again, without fear of a lawsuit, resell a story or photo to another publisher after you’ve sold it to Pacific Basin.

One of us signatories below (Bill Harby) wrote twice to the president of Pacific Basin, John Alves, and explained these concerns, asking him to delete the word, “editorial.” Both times Mr. Alves refused to make any revisions whatsoever to the contract.

So, with all this in mind, we ask you to consider very carefully before you sign the Pacific Basin freelance contract. If you don’t want to expose yourself to a lawsuit, if you don’t feel you are being treated fairly, you may choose not to sign. And if you have already signed this contract, you may choose not to work with Pacific Basin’s publications anymore unless they are willing to amend the contract.

Though we have other issues with the Pacific Basin freelance contract (we’d like to see the 12-month period of exclusivity reduced to 6 months, and to be paid separately for each use in any medium), we only ask for one revision: the deletion of the word “editorial” under #2, paragraph b.

Individually, we freelancers are powerless to affect the way we’re treated by powerful publishing companies. That’s why most Hawai‘i editorial freelance fees have risen so little over the last 20 years or so. But if we act together, we may cause the companies that rely on our skills and talent to treat us fairly.

Thanks for considering. Please feel free to pass this message along to any writers, photographers, bloggers, or anyone else who may be interested.

If you have questions or comments, please feel free to contact Bill Harby at billharby@hawaiiantel.net or 808-985-8558.

Cheryl Tsutsumi, writer
John W. White, writer
I would first like to thank Bill for forwarding this disturbing bit of information to we, the members of the Hawaii freelance community and to encourage all of you out there providing content to any of the publications under the Pacific Basin Communications banner to sign this letter. As you can see, there are quite a few signatories to the letter of protest already onboard. To add your name to the letter, please contact Bill Harby at: billharby@hawaiiantel.net
Remember, there is strength in numbers and you CAN make a difference. Get on board now!

Posted by Tony Novak-Clifford at 11:41 AM No comments:

Hoedown with The Throwdowns 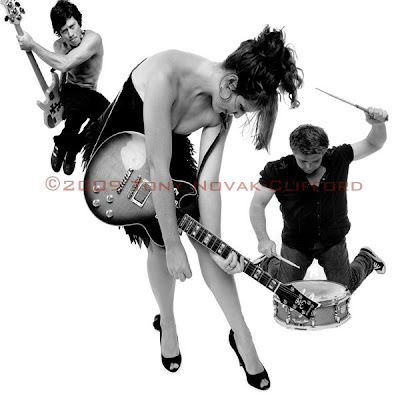 More fun than a barrel of monkeys, The Throwdowns showed up in the studio on friday afternoon for photos to grace the cover of an upcoming CD release. Full of energy and with a definite sense of image, the process of shooting was, for me, like walking on air. Just aim & shoot... the band did all the rest. Bassist Kimo launched into the air on a mini trampoline brought in for just that purpose. Drummer Ian contorting his legs painfully to just the right twisted effect. Front gal Erin alternating between an Alice in Wonderland persona to deranged rock & roll beauty. There's plenty of imagery for graphic designer to the stars Scott Johnson of Dogtowne Graphics to work with in creating an eye-catching piece of art.
Happy Birthday to Chase the Light which celebrated one year online on Saturday. I celebrate 52 years of stomping on the terra today.
Posted by Tony Novak-Clifford at 5:32 PM No comments: 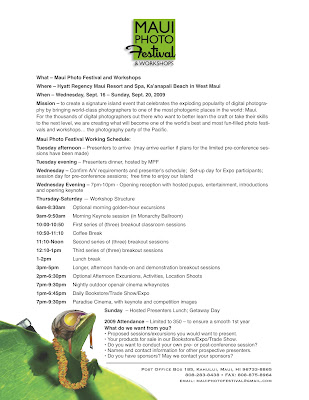 It's still in the planning stages but the folks at the newly launched Maui Photo Festival are planning a 4 day extravaganza of workshops, lectures, demonstrations and more at the beautiful Hyatt Regency Resort & Spa on Kaanapali Beach September 16th-20th.
Already signed up to make appearances and share their wisdom are Jack Reznicki, Rick Sammon, Eddie Tapp, combat photojournalist Andy Dunaway & many others, including yours truly who has been asked to speak on & demonstrate the art of food photography.
It all looks like an informative & good time to sharpen your skills, learn new techniques & enjoy enjoy a sun drenched four days at one of Maui's premier hotels & resorts. For more info & to sign up, go here. I'll keep you posted as more information becomes available.
Posted by Tony Novak-Clifford at 6:15 PM No comments: